I see the hand basket….. I’m not getting in. 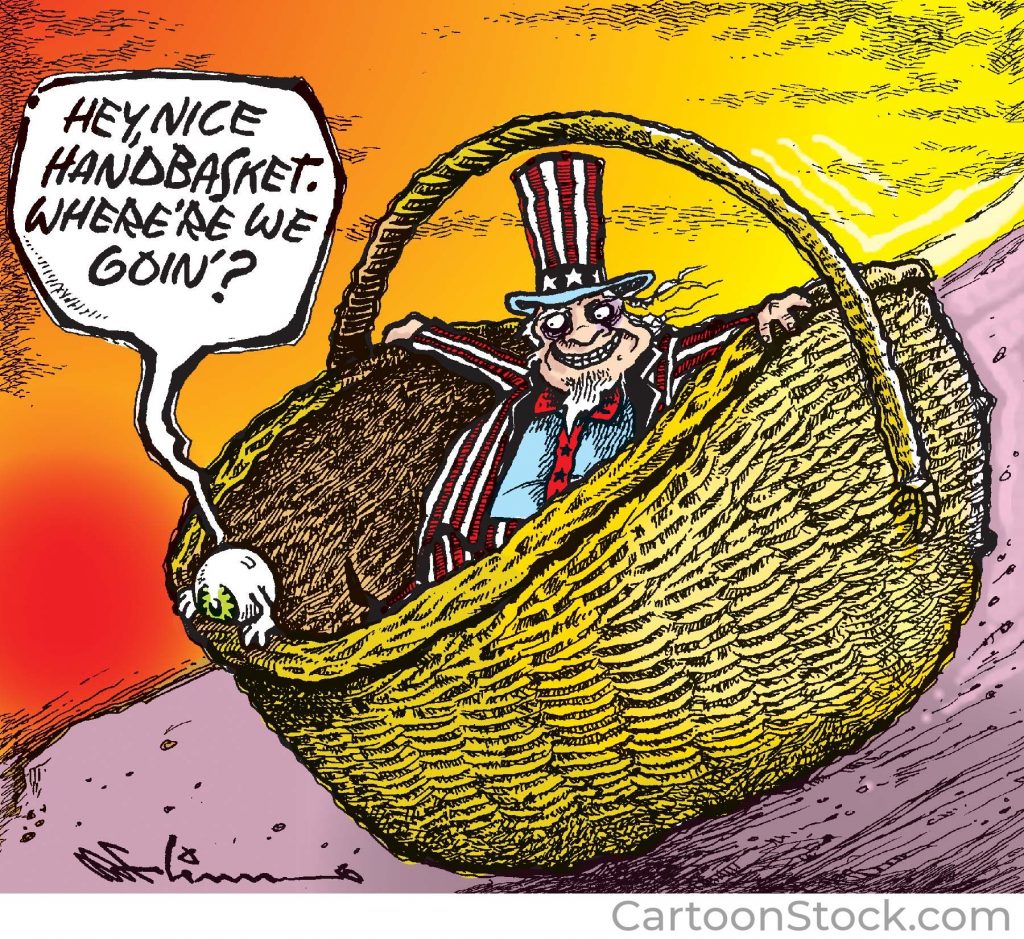 UncleSam going to hell in a hand basket?

The world indeed seems to be going to hell in a hand basket and the pace of its journey seems to be picking up.

Tucker Carlson was absolutely on fire tonight.  After the show was over, I had no choice but to write this blog.  I couldn’t remain silent.

Then I found the perfect cartoon. Humor somehow makes everything better or at the very least, more tolerable.

The last two years have been crazy for a whole bunch of reasons.

I will start out by saying that I’m pretty optimistic by nature.  My faith fuels me, through thick and through thin.  I believe God.  Period.  Not just I believe IN God, but I believe Him and what He says.

He tells us that we have a hope and a future.  He also tells us that the world WILL have tribulation, but to be of good cheer because He has overcome the world.

But there are forces at work that are [pardon the pun] hellbent on taking us in a totally different direction.

When the current administration shut down the Keystone Pipeline and threw out any possibility of energy independence, like many people, I was puzzled.  As we’ve watched the price of gas skyrocket and our dependency on our enemies for oil increase, it was discouraging at best.

When my industry (travel and events) was totally decimated by the Pandemic, I could hardly believe it was happening and how long it lasted.  I’ve managed to keep my company afloat, but just barely.  And don’t get me started on the Small Business Administration’s support of companies like mine.  We can send billions to Ukraine, but we can’t help our small businesses.

When we launched this platform and gave a home to the voices that have been silenced on mainstream and social media, I was amazed at the number of people and organizations that had been impacted by censorship.

When I heard that farmers were being asked to burn their crops, it just didn’t seem like that could be true.

When I watched planes and buses full of illegal immigrants being shipped all over our country in the dead of night (literally) without knowledge of local governments, and the drugs and human smugglers pouring across our border, I can’t even think of a word to describe the depths of my reaction.

Then there is the matter of leaving a massive cache of weapons and leaving behind Americans in Afghanistan when we pulled out our military.

And the fact that over 75% of new sellers on Amazon are from China.

Oh and the fact that over a dozen food plants have had fires or airplanes crashing into the plant.  All while our commander in chief tells us that we are expecting a food shortage.   To which I would reply “no kidding” (or something more colorful if this weren’t a family blog).

And today the commander in chief said that our kids belong to the schools.  Say what?

The list goes on and on and on.  I’m now completely incredulous.

But tonight the monologue on Tucker Carlson  Homeland Security’s ‘Disinformation Governance Board’ took the cake.  He began by playing a video of the new head of the dystopian agency singing a bizarre kareoke song about disinformation.

If you didn’t hear about the new appointment of Nina Jankowicz, suffice it to say that Big Sister is watching you.  I’m normally pretty supportive of women in leadership roles, but I find her just plain creepy and to Tucker’s point, just weird.

Having our government policing free speech is the final straw.  A “hell in a hand basket” kind of final straw.  This won’t end well.

Baskets enroute to hell are made of straw.  Coincidence???  I think not.

If the country is indeed going to hell in a hand basket, I’m definitely not getting in and neither should you.